From Wikipedia, the free encyclopedia

Radiofrequency ablation (RFA) is a medical procedure in which part of the electrical conduction system of the heart, tumor or other dysfunctional tissue is ablated using the heat generated from medium frequency alternating current (in the range of 350–500 kHz).[1] RFA is generally conducted in the outpatient setting, using either local anesthetics or conscious sedation anesthesia. When it is delivered via catheter, it is called radiofrequency catheter ablation.

Two important advantages of radio frequency current (over previously used low frequency AC or pulses of DC) are that it does not directly stimulate nerves or heart muscle and therefore can often be used without the need for general anesthetic, and that it is very specific for treating the desired tissue without significant collateral damage.[citation needed]

Documented benefits have led to RFA becoming widely used during the last 15 years.[2][3] RFA procedures are performed under image guidance (such as X-ray screening, CT scan or ultrasound) by an interventional pain specialist (such as an anesthesiologist), interventional radiologist, otolaryngologists, a gastrointestinal or surgical endoscopist, or a cardiac electrophysiologist, a subspecialty of cardiologists. 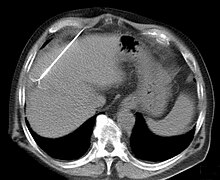 RFA may be performed to treat tumors in the lung,[4][5][6] liver,[7] kidney, and bone, as well as other body organs less commonly. Once the diagnosis of tumor is confirmed, a needle-like RFA probe is placed inside the tumor. The radiofrequency waves passing through the probe increase the temperature within tumor tissue and results in destruction of the tumor. RFA can be used with small tumors, whether these arose within the organ (primary tumors) or spread to the organ (metastases). The suitability of RFA for a particular tumor depends on multiple factors.

RFA can usually be administered as an out-patient procedure, though may at times require a brief hospital stay. RFA may be combined with locally delivered chemotherapy to treat hepatocellular carcinoma (primary liver cancer). A method currently in phase III trials uses the low-level heat (hyperthermia) created by the RFA probe to trigger release of concentrated chemotherapeutic drugs from heat-sensitive liposomes in the margins around the ablated tissue as a treatment for Hepatocellular carcinoma (HCC).[8] Radiofrequency ablation is also used in pancreatic cancer and bile duct cancer.[9]

RFA has become increasingly important in the care of benign bone tumors, most notably osteoid osteomas. Since the procedure was first introduced for the treatment of osteoid osteomas in the 1990s,[10] it has been shown in numerous studies to be less invasive and expensive, to result in less bone destruction and to have equivalent safety and efficacy to surgical techniques, with 66 to 95% of patients reporting freedom from symptoms.[11][12][13] While initial success rates with RFA are high, symptom recurrence after RFA treatment has been reported, with some studies demonstrating a recurrence rate similar to that of surgical treatment.[14] RFA is also increasingly used in the palliative treatment of painful metastatic bone disease in patients who are not eligible or do not respond to traditional therapies ( i.e. radiation therapy, chemotherapy, palliative surgery, bisphosphonates or analgesic medications).[15] 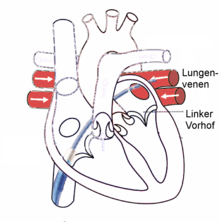 Schematic view of a pulmonary vein ablation. The catheter reaches (from below) through the inferior vena cava, the right atrium and the left atrium, to the orifice of the left upper pulmonary vein.

Radiofrequency energy is used in heart tissue or normal parts to destroy abnormal electrical pathways that are contributing to a cardiac arrhythmia. It is used in recurrent atrial flutter (Afl), atrial fibrillation (AF), supraventricular tachycardia (SVT), atrial tachycardia, Multifocal Atrial Tachycardia (MAT) and some types of ventricular arrhythmia. The energy-emitting probe (electrode) is at the tip of a catheter which is placed into the heart, usually through a vein. This catheter is called the ablator. The practitioner first "maps" an area of the heart to locate the abnormal electrical activity (electrophysiology study) before the responsible tissue is eliminated. Ablation is now the standard treatment for SVT and typical atrial flutter and the technique can also be used in AF, either to block the atrioventricular node after implantation of a pacemaker or to block conduction within the left atrium, especially around the pulmonary veins. In some conditions, especially forms of intra-nodal re-entry (the most common type of SVT), also called atrioventricular nodal reentrant tachycardia or AVNRT, ablation can also be accomplished by cryoablation (tissue freezing using a coolant which flows through the catheter) which avoids the risk of complete heart block - a potential complication of radiofrequency ablation in this condition. Recurrence rates with cryoablation are higher, though.[16] Microwave ablation, where tissue is ablated by the microwave energy "cooking" the adjacent tissue, and ultrasonic ablation, creating a heating effect by mechanical vibration, or laser ablation have also been developed but are not in widespread use.

In AF, the abnormal electrophysiology can also be corrected surgically. This procedure, referred to as the "Cox maze procedure", is mostly performed concomitantly with cardiac surgery.

A new and promising indication for the use of radiofrequency technology has made news in the last few years. Hypertension is a very common condition, with about 1 billion people over the world, nearly 75 million in the US alone. Complications of inadequately controlled hypertension are many and have both individual and global impact. Treatment options include medications, diet, exercise, weight reduction and meditation. Inhibition of the neural impulses that are believed to cause or worsen hypertension has been tried for a few decades. Surgical sympathectomy has helped but not without significant side effects. Therefore, the introduction of non-surgical means of renal denervation with radiofrequency ablation catheter was enthusiastically welcomed. Although, the initial use of radiofrequency-generated heat to ablate nerve endings in the renal arteries to aid in management of 'resistant hypertension' were encouraging, the most recent phase 3 studying looking at catheter-based renal denervation for the treatment of resistant hypertension failed to show any significant reduction in systolic blood pressure.[19]

Radiofrequency ablation is a minimally invasive procedure used in the treatment of varicose veins. It is an alternative to the traditional stripping operation. Under ultrasound guidance, a radiofrequency catheter is inserted into the abnormal vein and the vessel treated with radio-energy, resulting in closure of the involved vein. Radiofrequency ablation is used to treat the great saphenous vein, the small saphenous vein, and the perforator veins. The latter are connecting veins that transport blood from the superficial veins to the deep veins. Branch varicose veins are then usually treated with other minimally invasive procedures, such as ambulatory phlebectomy, sclerotherapy, or foam sclerotherapy. Currently, the VNUS ClosureRFS stylet is the only device specifically cleared by FDA for endovenous ablation of perforator veins.[21]

It should be pointed out that the possibility of skin burn during the procedure is very small, because the large volumes (500 cc) of dilute Lidocaine (0.1%) tumescent anesthesia injected along the entire vein prior to the application of radiofrequency provide a heat sink that absorbs the heat created by the device. Early studies have shown a high success rate with low rates of complications.[22]

RFA was first studied in obstructive sleep apnea (OSA) in a pig model.[23] RFA has been recognized as a somnoplasty treatment option in selected situations by the American Academy of Otolaryngology[23] but was not endorsed for general use in the American College of Physicians guidelines.[24]

The clinical application of RFA in obstructive sleep apnea is reviewed in that main article, including controversies and potential advantages in selected medical situations. Unlike other electrosurgical devices,[25] RFA allows very specific treatment targeting of the desired tissue with a precise line of demarcation that avoids collateral damage, which is crucial in the head and neck region due to its high density of major nerves and blood vessels. RFA also does not require high temperatures. However, overheating from misapplication of RFA can cause harmful effects such as coagulation on the surface of the electrode, boiling within tissue that can leave "a gaping hole", tears, or even charring.[26]

RFA, or rhizotomy, is sometimes used to treat severe chronic pain in the lower (lumbar) back, where radio frequency waves are used to produce heat on specifically identified nerves surrounding the facet joints on either side of the lumbar spine. By generating heat around the nerve, the nerve gets ablated thus destroying its ability to transmit signals to the brain. The nerves to be ablated are identified through injections of local anesthesia (such as lidocaine) prior to the RFA procedure. If the local anesthesia injections provide temporary pain relief, then RFA is performed on the nerve(s) that responded well to the injections. RFA is a minimally invasive procedure which can usually be done in day-surgery clinics, going home shortly after completion of the procedure. The patient is awake during the procedure, so risks associated with general anesthesia are avoided. An intravenous line may be inserted so that mild sedatives can be administered. The major drawback for this procedure is that nerves regenerate over time, so the pain relief achieved lasts for only a short duration (6–24 months) in most patients.[citation needed]

RFA is also used in radiofrequency lesioning, for vein closure in areas where intrusive surgery is contraindicated by trauma, and in liver resection to control bleeding (hemostasis) and facilitate the transection process.

This process has also been used with success to treat TRAP sequence in multiple gestation pregnancies. This is becoming the leading method of treatment with a higher success rate for saving the 'pump' twin in recent studies than previous methods including laser photocoagulation. Due to the rarity of this complication, its correct diagnosis statistics are not yet reliable.

RFA is being investigated to treat uterine fibroids. A system developed by Halt Medical Inc. uses the heat energy of radio frequency waves to ablate the fibroid tissue. The device obtained FDA approval in 2012.[32][33] The device is inserted via a laparoscopic probe and guided inside the fibroid tissue using an ultrasound probe (see video demonstration [2]).

RFA is also used in the treatment of Morton's neuroma[34] where the outcome appears to be more reliable than alcohol injections.[35]

The Mikael Nordfors site operates under a Creative Commons License